It is June 17th and the bush is covered with pink wild roses. We take a walk into the thick undergrowth only to retreat quickly from the onslaught of blood thirsty mozzies.

The bee yard is full of grass and we are concerned that the electric fence will short out.  A quick whip around with the weed wacker does the trick and the bees don’t seem to notice.

We discover ants are attacking the hive.  Usually a strong hive will take care of the ants, but our hive is not strong so we are concerned.  Since our hives are new, the bees have not had a chance to create much of a propolis seal around the newly created combs. And at this stage, I am not sure how vigilant the guard bees at the entrance will be.  At a mentoring session, we learned that ant traps can be quite effective. Unfortunately there are no ant traps in Vilna, so it is off to St. Paul, a thirty minute drive to protect our hives.

On June 12th, Worth and I along with two other novice beekeepers attended a mentoring session at the Craig’s. We added supers to hives, scraped beeswax off frames, loaded pallets and relocated hives.

Worth was the first to get stung. Suffering from a bout of hay fever he walked out into the field away from the bees and unzipped his veil to tend to his nose. As soon as the veil went down, the bee went in and stung him perfectly in the middle of his forehead. By this time, Lucy’s husband, Martin was also several meters away from the hives and off in the field. However, he had a real battle, and from a distance we saw arms flailing and a great deal of swatting going on. He was only wearing a half bee suit, and parts of it now appeared to be coming off.  This was not a good sign.  It was probably 15 minutes later when I was stung on my ankle. We were moving hives on to a flat-deck trailer when the angry little creeper got me. The pain was sharp, and then dull and throbbing.

We relocated hives to two different areas and it was somewhere in between when Lucy got stung. I am not quite sure how two bees ended up in her hair, but Worth and I looked on in amazement as the Bee Whisperer worked to free the bees without getting stung. By this time, Martin had gone into hibernation with at least 10-12 stings, a great number of which were on his face. We were down a man, so that meant double duty for the rest of us. Off came the pallets, down the ditch and the up the other side to the edge of the field. We off-loaded more supers and nucs. It was hot and muggy and the inside of my bee suit was like a sauna. By the end of the evening, I looked like a drowned rat. Worth was getting more and more congested and felt as if he had corn-cobs shoved up his nose. Mary was puffed out and Martin was, well… not getting out of the car. All in all, it was an action packed evening and something of a black comedy. Any illusion that beekeeping is glamorous was completely dispelled. It was however a memorable evening; we had accomplished a lot of work and learned a great deal more.

Just over an hour later and still hanging around.

We headed back to the Ranch on June 4th and now it was time to inspect the AWOL hive.  Having attended the mentoring session at Craig’s, Worth and I had a much better idea of what we were actually looking for.  In addition, we were not quite as reluctant to handle and move the frames around.  It was a sight for sore eyes when we saw one of the frames in the AWOL hive had yielded a fantastic combination of brood at various stages of development.  The presence of the “egg of the day” meant that the queen was present and actively laying. I would sleep better that night knowing that the split that Craig talked me through had actually worked… my colleagues (Raj and Sandra) at work now refer to Craig as the “Bee Whisperer.”

Pollen, Capped Brood, Larva and “Egg of the Day” 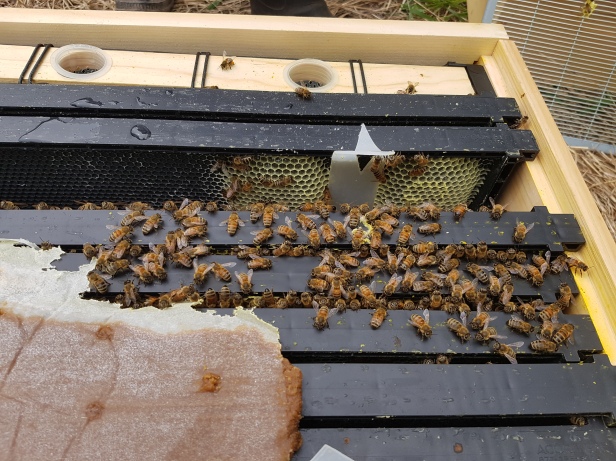 The “weak” AWOL hive with a huge desire to thrive.

A Friend at the Hives

On our way back to the farm we encountered a rather interesting sight.  At first glance it looked like a ball of fur on top of a fence post.  When Worth backed up the truck so that we could get a second look, we found it most certainly was a ball of fur and that it was also alive! 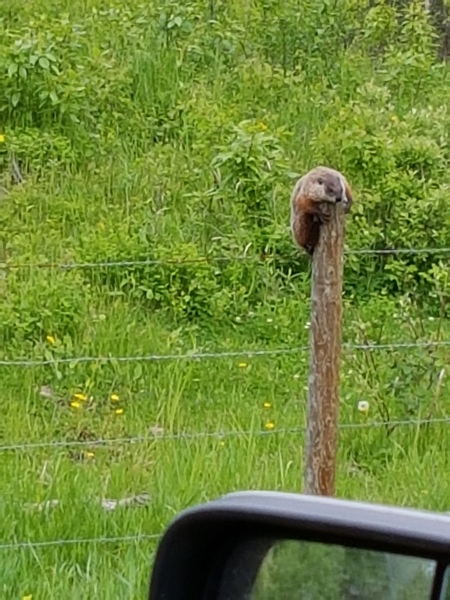 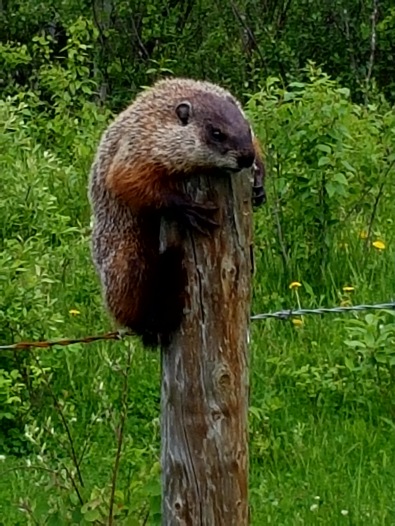